Still 1700 words behind where I should be to complete on time. I am hopefully about tomorrow, as any writer should be. Today’s excerpt is an explanation of why Jorunn and Othin (our heroes) killed all the raiders. Again this raw, unrevised, what I just finished writing. 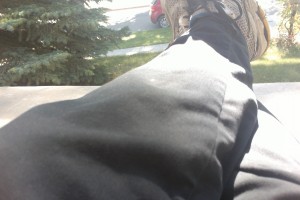 “Now that we are going I can explain what happened from my point of view. First the ambush wasn’t a chance meeting. Someone put a tracking spell on something we were carrying. My guess is that it was on the grill. The trigger for it was when you started to set up, Karl. When it was touched the spell sent out the location. The attack ddidn’t happen immediately, because the raiders were waiting at the normal spot you stop for lunch. We went past it. We went by it pretty fast. Which meant the Raiders had to play catch up. Did you notice how almost all the raiders were in the direction of your normal camp[? They knew we were coming. They also knew enough that Noak and Neilsen would react with trained and experienced skill and put a wind wall up. But Othin and I were unknown talents. This is why they went after Othin first. A channeller without a forge is just another person. Othin being larger and known to have great skill with an axe and mace was the target they wanted. If they had tried for Noak or Neilsen, they would have felt it and protected themselves in time. Killing you, Karl, gave them no advantage. They wanted you to see the wizards die. To show you no hope. Why this is I don’t know. But I am certain that they would have killed Noak, Neilsen, Othin and I. I know this because all the arrows, all of them were poisoned. You could see it by the black tips. To poison that many arrows to kill channelers and forges costs a small fortune. There are only a few poisons that can do this, the ingredients are hard to find and dangerous to assemble. Only few persons in the world know how to make them.

Like Loading...
This entry was posted in nanowrimo and tagged Channeler and Forge, nanowrimo, writing. Bookmark the permalink.